Yesterday was my second attempt at time-trialing. It was the same flat 5 mile course as last week where I’d produced an average speed of 21 mph with no tactics other than cycling as fast as I could.

This week I set myself the goal of averaging 22 mph but with the aim of trying to pace myself, rather than red-lining and hanging on like a slobbering wreck. I made a few tweaks to the bike (raised the saddle a centimetre and removed the spacers from beneath the stem) to get myself lower and flatter and also turned up a little earlier and did a warm up lap where I surprised myself by averaging 20 mph with a steady and controlled level of effort. This gave me good confidence. 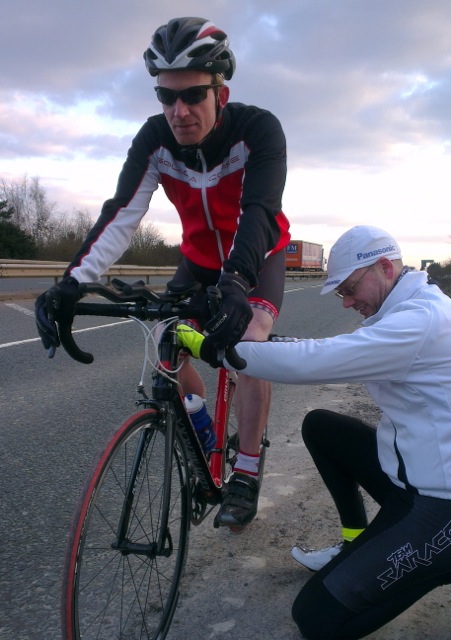 The outbound leg felt good with an average speed just above my target of 22 mph. Just before the turn I was overtaken, however rather than feeling demoralised I just felt respect for the quicker pace of the other rider. I had set myself a target and wasn’t about to get too distracted by other people. I felt good enough on the return leg to drop down a gear and increase the pace a touch. I pushed the last mile hard and crossed the line one minute quicker than the previous week at an average speed of 22.4 mph. I’m pleased with the performance and am looking forward to making further improvements over the season. Next week is 2 laps of this circuit and I think my goal will be to try and maintain this week’s pace for the full distance.