I entered the Bristol South Road Race a few months ago. It was one of those spontaneous mid-winter decisions taken while browsing the following season’s race calendar. The race starts less than 5 miles from my house and is on familiar local roads so I couldn’t think of any good reason not to enter. However, as the race drew nearer and with my place secured, I began to think of several:

To add to the list I woke on the morning of the race with a sore throat and what felt like the onset of a cold so considered withdrawing. But in the end, I decided that I’d already lost too much sleep over the race to be a ‘DNS’ so whatever the outcome I would just try to enjoy the experience and not worry about the result.

Following the riders’ briefing at the HQ I scored my first newbie notch by being a bit slow to collect my bike and head to the start line. The result being that I started near the back of the 80 man field. Despite the start of the race being neutralised, the concertina effect of the peloton meant that we were constantly braking and accelerating at the back. There was a fair bit of shouting and jostling but it was less scary than I was expecting. I just held my line and tried to remember to keep breathing. 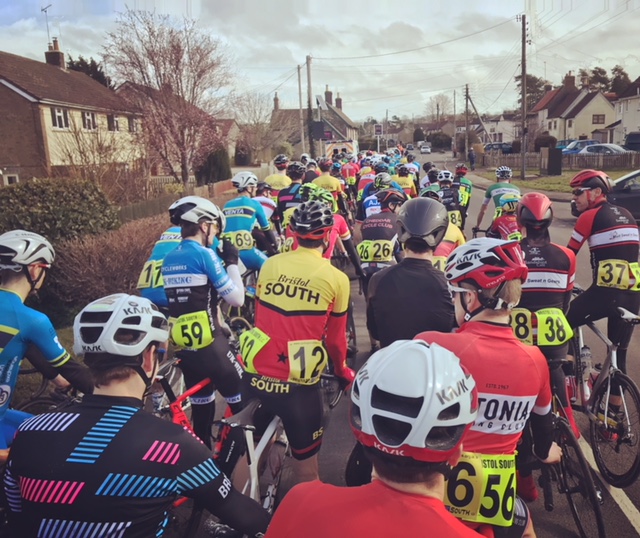 The view from the back

The biggest surprise was how quickly the field was decimated. Less than 10 miles into the race I looked behind expecting to see 20 riders and realised I was at the back of the pack. It wasn’t long after that my own race ended. We were halfway up Stowey Hill for the second time when I realised that I was following riders who were being dropped from the peloton. I moved past them to try and regain contact. But by the top of the climb there was still a small gap in front, then I was hit by the headwind. The gap grew. I gave it everything but could only watch the field gradually leaving me behind. Suddenly two of the other dropped riders came past me shouting so I dug even deeper and caught them. We rode as a three man chain-gang for a few miles, taking turns fighting the wind but the peloton remained tantalisingly just out of reach. Eventually we received our sign that our race was done when we were overtaken by the motorcycle outriders, marshals car and ambulance. I stopped pedalling and relaxed.

Realising that I had a fair bit of time before the race ended, I unpinned my numbers and headed off for an enjoyable warm-down cruise around the lake before then heading up to the finish line where I met the majority of the field cheering on the few remaining riders.

The race was won by Andrew Kirby – after mistakenly celebrating a lap too early he incredibly managed to ride on solo for another lap and hang on for the win. Second place was Ollie Bratchell and third George Jones. All three in their teens or early twenties which made me feel like a bit of oldie. What is wrong with the youth of today – wasting the best years of their life!

With Will, celebrating being in one piece ahead of our trip to Belgium in a fortnight – funds are urgently needed in the personal brownie point account!

Getting spat out of the back of your first Cat 4 race is apparently a rite of passage. The fact that this race was also Cat 3 and over a hilly course meant there was only likely to be one outcome for me. My first priority was to avoid any crashes; my second was to try and finish. I think in the end there were only 15 or so finishers so I’m mostly just happy to have survived in one piece. I’m taking a few weeks break from racing now to focus on some training and some enjoyment. Next on the agenda is a lads’ weekend in Belgium to watch some of the Classics and ride a cyclo-sportive.