I took a few days off work last week to head down to the South of France and watch the Tour de France. With my bike packed inside my new bike bag I negotiated the First Great Western railway, the London Underground, the Eurostar, the Paris Metro and the TGV to reach Lyon where we picked up our camper van. From Lyon we headed up into the French Alps and were extremely fortunate to find a space along the Tour de France route on Alpe d’Huez, 4km from the finish line.

There were five of us in the camper van and four had brought bikes. The next morning we rebuilt our bikes with the stunning backdrop of snow-capped mountains and a regular stream of lycra-clad cyclists struggling past. 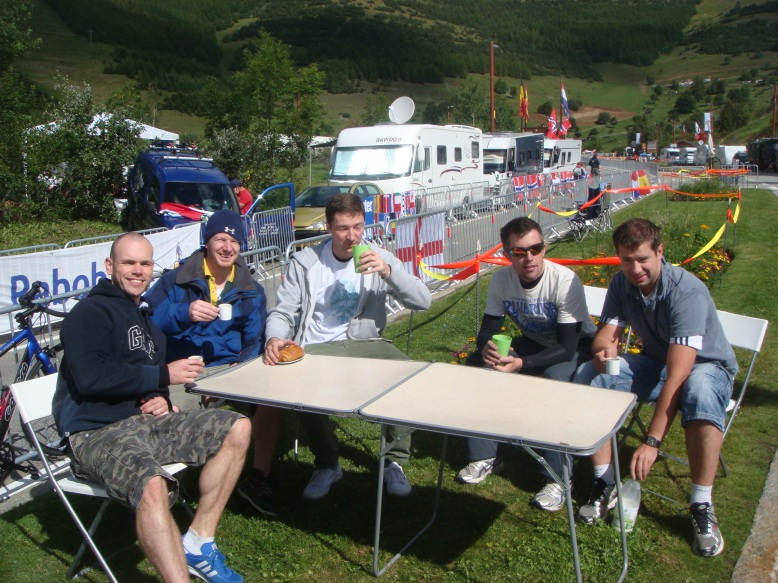 The day before the tour arrived at Alpe d’Huez we set up the camping table and chairs to mark our turf and had a hearty breakfast before setting off on an exhilarating ride to the bottom of the mountain.

The scenery was breathtaking and we stopped on several of the 21 hairpin bends to take in the views. My top speed on the way down was 42.5mph which was a great adrenaline rush and required some heavy braking before the bends. By the time we had reached the base we could smell the burning rubber of our brake pads and the wheel rims were too hot to touch!

At the foot of the mountain we prepared ourselves for the climb. Knowing that we had 8 miles of non-stop climbing through 21 switchbacks into thinning air we set our personal challenges. Being relatively new to cycling I set myself the simple task of completing the climb without stopping.

The gradient of the first mile seemed to be the steepest (this had been highlighted the night before when our campervan had struggled to get out of second gear – by the time we parked there was smoke billowing out of the bonnet!) By the fifth and sixth switchbacks I was beginning to doubt my ability to keep going but I dug deep and kept pumping the pedals. The crowd along the route were in great spirits and I was encouraged along by cheering, clapping, horns and bizarrely some giant cow bells.

As I neared the summit at 6,100 feet I could feel my breathing getting shorter as the air thinned but I pushed on and crossed the line in a time of 1 hour & 18 minutes. This was some way behind a couple of the lads’ impressive sub-hour times, but a great personal achievement nonetheless. We decided to stick around at the top and enjoy a well-earned beer and join the crowds watching the tour on tv.

Back at the van we showed our support of British rider, Mark Cavendish, by graffiiting his name on the road beside our van. This was a precarious task as cyclists flew by!

On the morning of the race I donned my lycra and climbed the 2 miles to the summit at Alpe d’Huez on an essential breakfast baguette-run. The carnival atmosphere of the crowd was great fun, especially the orange-clad Dutch fans dancing with chairs above their heads to dodgy Euro-dance music. 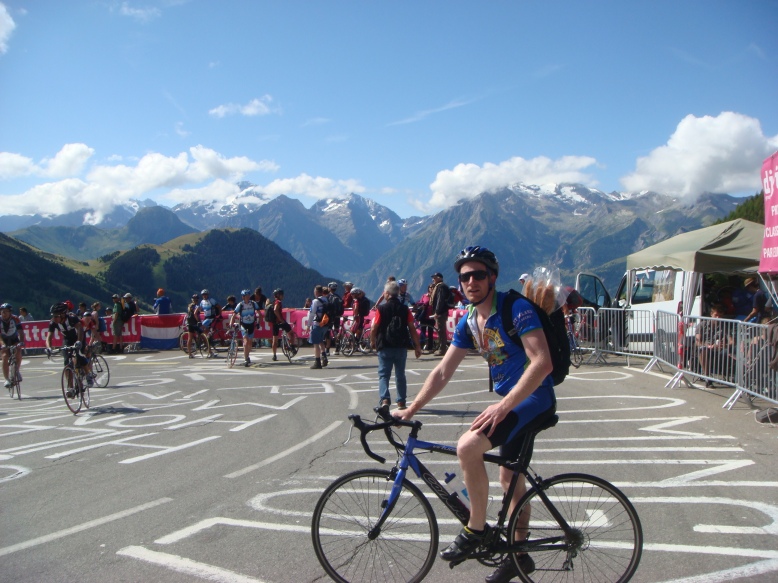 As race time approached the crowds began to swell and reports came through of a million people on the mountain. 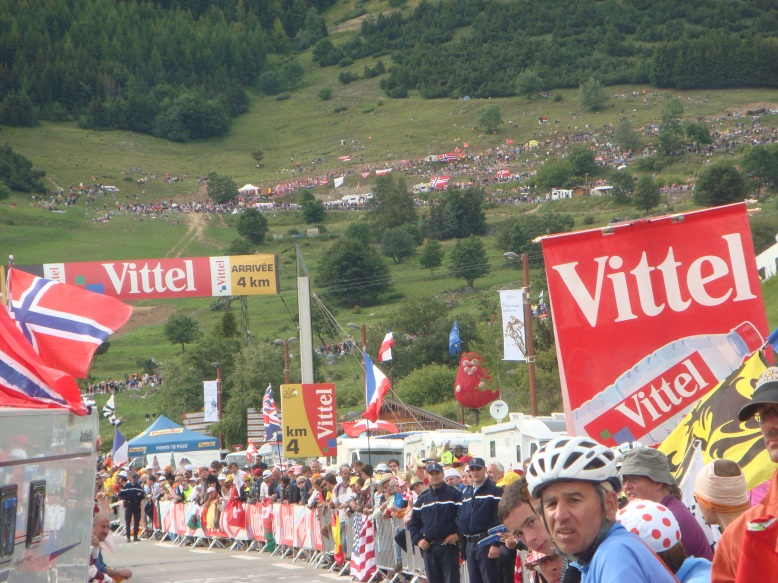 After a crazy half hour of the ‘caravan’ of marketing teams driving through and distributing freebies, the cyclists came by. First was Contador with a grimace on his face, closely followed by Sanchez and Rolland. It was great to be within touching distance of the athletes and reassuring to see them go by in first gear.

It was a great day, and not even the bandit overnight graffiti-vandalism of our support for Cavendish could dampen our spirits. If it’s not clear from the photo above, “Cav Cav in the Green” was amended to “Gay Cav in the Pink”. We suspected the mischievous Dutch fans!